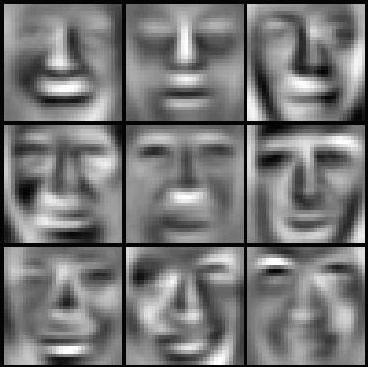 Eigenfaces are super interesting extensions to the concept of eigenvectors, and also serve as fascinating visualizations. Basically, if you have a large dataset of face images, eigenfaces are a set of face-like images that collectively capture the variation in the original set of faces. Given a subset of the eigenfaces, an original face can be encoded as relative amounts of each eigenface, and then rebuilt by adding the encoded amounts of each eigenface together.

Let’s explore these in more detail!

Say you have a large dataset of faces and wish to find these eigenfaces. We’ll use a cropped version of the Labeled Faces in the Wild (LFW) dataset that will contain 5000 example faces, each 32px by 32px (1024 pixels total per face), and saved in the grayscale format. Let’s visualize the first 100 faces: 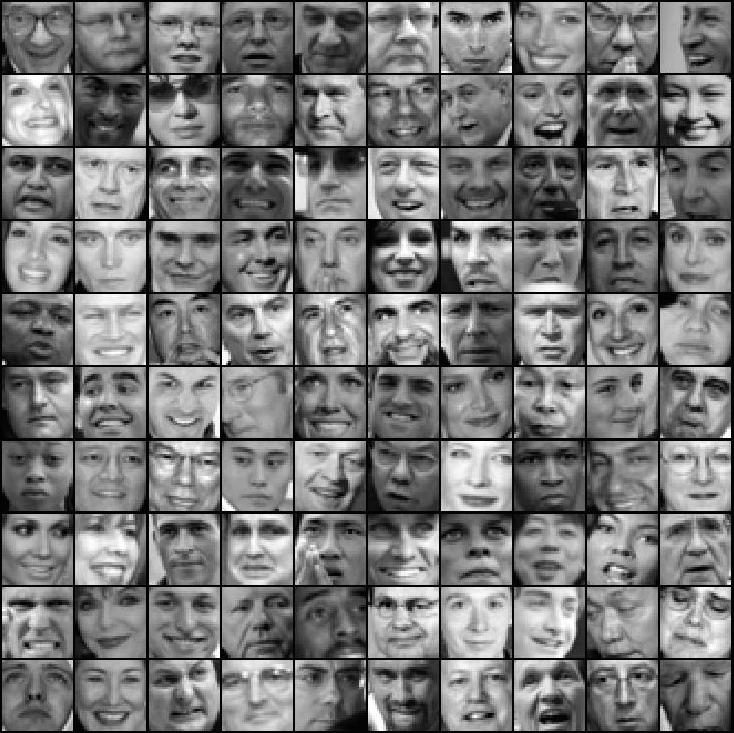 The goal then becomes finding the \(k\)-dimensional subspace in which the data approximately lies.

In order to do this, we will start by finding a direction \(u\) that will form a 1-dimensional subspace that approximates the data with the most variability possible. Concretely, if we have an \(n\)-dimensional vector \(u\), we can project an \(n\)-dimensional image \(x^{(i)}\) onto it by \(x^Tu\), resulting in a 1-dimensional, scalar value. The variability of the set of \(m\) projected images can then be calculated as \(\sum_{i=1}^m ({x^{(i)}}^Tu)^2\). For our matrix of images, the projections can be written as \(Xu\), and the variance written more concisely as the squared norm of the projections, \(\|Xu\|^2\).

As stated above, we want to find a direction \(u\) that preserves the most variance. Thus we want to maximize the projection variance \(\sigma^2\), subject to \(u\) being unit-length (\(\|u\| = 1\)) since we only want a direction. If we rewrite the equation in a certain way, we can discover some clever math:

Notice that in the final line, a large matrix \(X^TX\) multiplied by the vector \(u\) becomes equal to a scalar variance \(\sigma^2\) multiplied by the same \(u\) vector. That equality leads us to the concept of eigenvectors & eigenvalues, which will help us to maximize these equations w.r.t. the variance.

Notice the correlation between this definition and the rewritten equation from above. Let’s write them out again:

From this we can see that our \(X^TX\) matrix maps to the matrix \(A\) (and is known as the covariance matrix of \(X\)), \(u\) is the eigenvector \(v\), and the variance \(\sigma^2\) is the eigenvalue \(\lambda\). So, with a bit of clever rewriting, we were able to redefine our goal in terms of eigenvectors/eigenvalues, which can be computed using existing algorithms.

The algorithm we have discussed so far is known as Principal Component Analysis, or PCA. It allows for determining the prinicipal components (the eigenvectors) that capture the most variance in the original data when projecting into the subspace created by them. The idea of PCA is that it allows for an \(n\)-dimensional dataset to be represented in a reduced set of \(k\)-dimensions, and thus is also known as a dimensionality reduction algorithm.

It is now time to discuss eigenfaces. As discussed above, the \(U\) eigenvectors can be considered the principal components of a dataset, and each capture a certain amount of the variability within the original data.

As we also mentioned above, if each image is \(n\)-dimensional (\(n\) pixels), then each eigenvector \(u\) will also be \(n\)-dimensional. Each value \(u_i\) is computed to capture the most variation at the \(i\)th pixel location across the dataset.

Therefore, if we visualize each \(u\) as if it were an image, we will find that they appear as ghost-like faces. Let’s plot the top 36 eigenfaces for our dataset:

Now that we have the eigenfaces, we can project our original faces onto a subset of \(k\) of them, thus reducing each image from \(n\)-dimensions down to a vector \(z\) of \(k\)-dimensions.

The images can then be rebuilt in \(n\) dimensions from the \(z\) encodings, with some loss in accuracy, using the following:

Let’s project our data onto \(k = 100\) eigenfaces, and then rebuild the original faces using the eigenfaces and \(z\) encodings for each image, resulting in the images below:

If we compare them side by side, we should see that the rebuilt images were close to the originals:

So, while each original image had 1024 pixels, by using only 100 eigenface encodings for each image, we were able to rebuild each image with pretty good accuracy. Awesome!

Overall, eigenfaces are super interesting. Hopefully this post serves as an interesting guide to them, and sparks interest into further exploration on the topic, in which case one should start with the original paper, by Turk & Pentland!

I’ve added demo code written in the Octave/Matlab language to go along with this post. It will compute the eigenfaces of the face dataset and produce the visualizations as shown. Check it out on github!